January 16, 1980, a group of 31 worshipers who loved the Lord and were on one accord met in the home of Brother Thomas and Sister Loretta Wright. They humbly prayed that God would direct them as they studied His Word under the guidance of the Holy Spirit and Lorenzo B. Hall.

GRACE DELIVERANCE BAPTIST CHURCH was the name selected with Hall as its founder and pastor. The church was incorporated, the Constitution and By-Laws were developed and adopted, officers were elected, and the Grace Deliverance Chorale was formed. Pastor Horace Melton, Executive Director of the Afro-American Center located in Allentown, PA, provided space for worship services. The first worship service was held Sunday, April 13, 1980.

In May 1980, we sought to rent property located at 838 N. New Street in Bethlehem, PA, which was owned by the Knights of Columbus. An offer was made to purchase the building, Agreements were drafted to procure a mortgage, but all was met with much opposition.

Pastor Roy T. Haupt of the Emmanuel Evangelical Congregational Church in Bethlehem, PA, expressed his desire to help his “newfound friend”, Pastor Hall. He and his congregation offered the use of their chapel area and access to other parts of their church at “NO CHARGE”. This was the beginning of a beautiful fellowship between the two churches and the beginning of many open doors. The first worship service in the chapel of the Emmanuel E.C. Church was held on Sunday, September 17, 1980.

Also in September, the Knights of Columbus agreed to carry the mortgage on 838 N. New Street, and in December, the property was purchased. We submitted an application for membership into the Central Baptist Association of Pennsylvania. The church was set aside by the Association and found to be in good standing after adhering to the policies set forth by the Association.

On March 15, 1981, the congregation marched from Emmanuel E.C. Church to 838 N. New Street. After the ribbon cutting ceremony, we marched into the church singing “We’ve Come This Far By Faith”. The church was filled to capacity.

Upon the departure of Pastor Lorenzo Hall in 1987, Leonard Stewart was recommended to be the full time pastor of Grace and was installed in November of 1988.

Upon the departure of Pastor Leonard Stewart, Dr. Melvin Tatem was installed as Pastor on September 19, 1995. Pastor Melvin Tatem retired as Senior Pastor of Grace on March 10, 2019 and Dr. Thomas Wright, III was appointed as Interim Pastor.

Our current location at 74 E. Broad Street in Bethlehem, was purchased in 2012 and the dedication service and banquet was held on May 19, 2013, our 33rd church anniversary.

During the tenure of our three godly leaders, Grace Deliverance Baptist Church has prospered and remained steadfast in the study of God’s Word.

Let your face shine on your servant; save me in your unfailing love.
Psalm 31:16
Sitting down, Jesus called the Twelve and said, “Anyone who wants to be first must be the very last, and the servant of all.”
Mark 9:35
Who are you to judge someone else’s servant? To their own master, servants stand or fall. And they will stand, for the Lord is able to make them stand.
Romans 14:4
Previous
Next 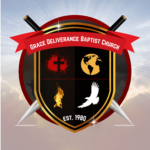